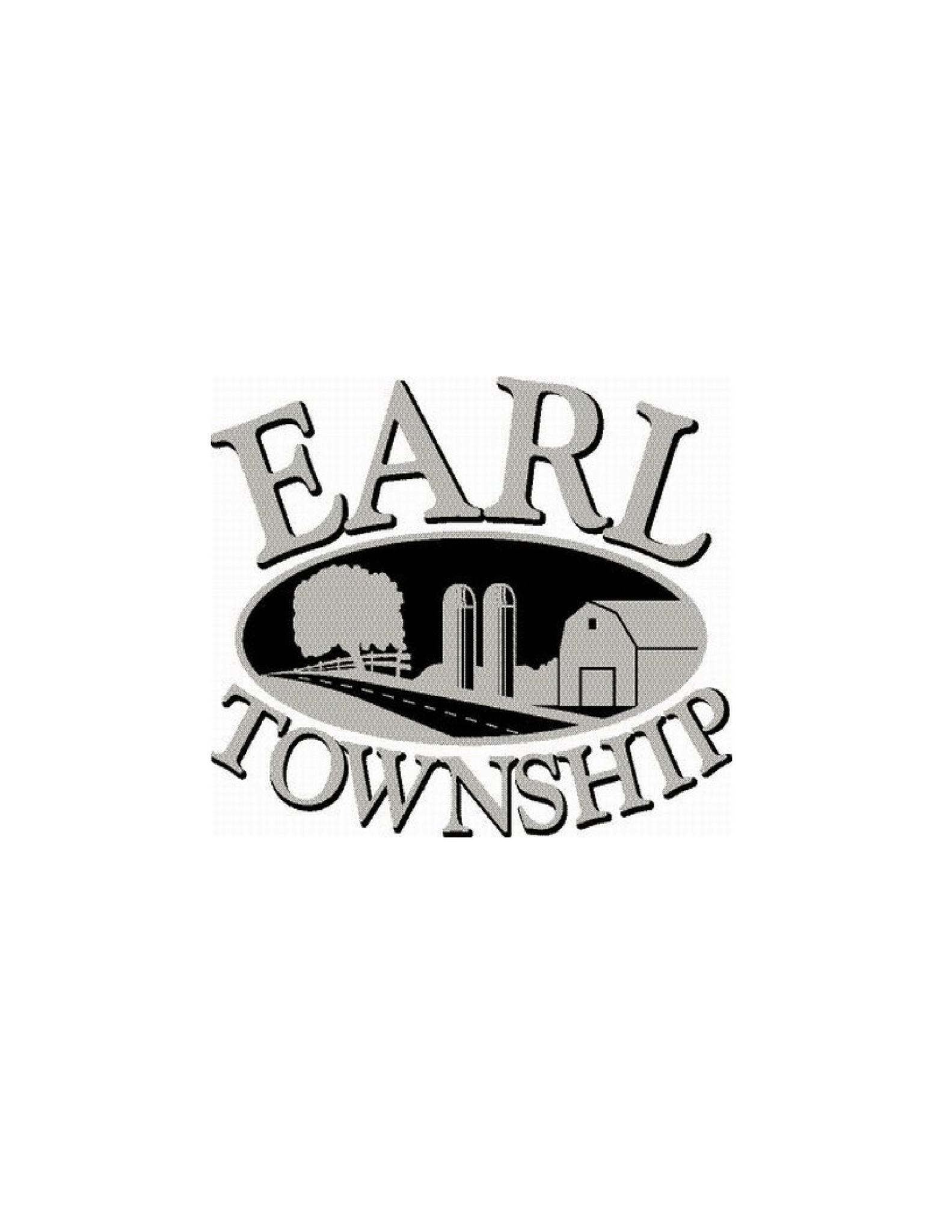 A Sketch of Earl Township History

The Earl Township supervisors would like to give you a little sketch of what Earl Township is about.  As you know, our world is undergoing drastic changes, but we believe that one must build from the past experiences. It is this past that we would like to take a look at first.

In 1681, King George II granted William Penn, a Quaker, a Charter and he proceeded to establish a government for the new colony.  Penn appointed a Governor, Provincial Council, and a General Assemble, which was to be elected by the freemen of the colony.  These were three counties in Pennsylvania – Bucks, Philadelphia, and Chester, and three lower counties in what is now Delaware.  These counties were established in 1682.

As settlers moved west and Chester County increased in numbers, additional townships were created by the Chester County Court.  Sadsbury Township, which was an old township, was extended west of the Octorara Creek.  In 1718, the settlers were clamoring for constables to help keep the peace, so Conestoga Township was established consisting of the land west and north of the Octorara Creek.  Other townships were formed, such as West Conestoga Township in 1720, which was north of the Pequea Creel: this later became Donegal Township. Pequea Township was formed in 1721 where Caernarvon, Brecknock, and East Earl Township are now located.

Development of civilization and law enforcement in the older portions of Upland or Chester County drove lawbreakers and scoundrels west of the Octorara Creek.  The settlers who moved along the Susquehanna River decided to petition Philadelphia to establish a now county.  The reasons set forth in the petition were; too far from courts, lack of constables and other officers, general lack of law and order, lack of highways, and no bridges were built.  On February 20, 1729 Governor Gordon announced the formation of a new county.  The governor instructed John Taylor, a Chester County surveyor, to run the line as straight as practical from the main branch of the Octorara Creek north to the Schuylkill River to eliminate disputes. This southern border was to be the southern boundary of the Province.  The new county was to include all that later become the western half of Berks County, and the land north and west of present-day Lancaster County.  Governor Gordon officially proclaimed Lancaster County’s existence on May 10, 1729.  The original townships which were created in June of 1729 were; Caernarvon, Conestoga, Derry, Drumore, Earl, Hempfield, Lampeter, Lancaster, Leacock, Lebanon, Manheim, Martic, Paxton, Sadsbury, Salisbury, and Warwick/  Late in 1729 Cocalico was added.

The founding of Earl Township can be attributed to Hans Grof.  Grof meant lower echelon nobleman.  Grof or Groff was a Swiss Mennonite who managed to acquire some 1,419 acres of land along Groff’s Run in Earl Township.  It is from this background in agriculture that the present-day Earl Township has it roots.  As we look into the future, your Board of Supervisors will try to maintain this heritage of agriculture.  As we in Earl Township face the future, we need to be aware of the fact that our farms are getting smaller and smaller.  Hans Grof had 1,419 acres of land while neighbor Henry Carpenter had 1,550 acres.  We face the challenge of keeping agriculture a viable industry as the average size of a farm continues to decrease.  In order to maintain out heritage, “on farm occupations” have become a necessary addition to farming and the preservation of the land.  Hans Grof was instrumental in establishing not only agriculture, but also roads and means of transportation.